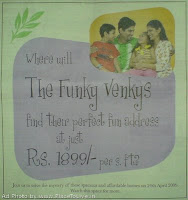 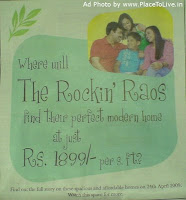 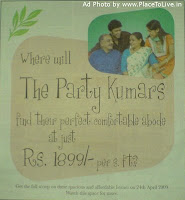 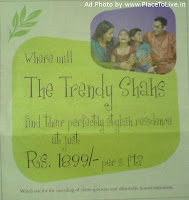 "Where will the Funky Venkys find their perfect fun address at just Rs.1899/- per s.ft ?" read the ad on Monday.
This was followed by Rockin' Raos, Party Kumars and Trendy Shahs until Thursday.
And the answer was also out on Thursday, though not in the ads but in the business section of The Hindu. The Sabari Group which has interests in hotels, supermarkets and property development and which had developed four landmark buildings on OMR under the banner of Vishranthi Sabari, in last couple of years, was planning to officially launch Sabari's Serenity on 24 April 2009.
A total of 936 apartments are planned, starting with 324 in Phase I. The sizes of the 1 to 3 bedroom apartments range from 580 sqft to 2362 sqft.
For more details read our post in the Budget Homes blog :
At 1899/sqft, Sabari's Serenity at Siruseri, starts at 11.86 Lakhs
at 7:49 PM