ETA Star Rosedale at Padur (OMR) has price correction of over 35% !!

The rates of ETA Star Rosedale project at Padur on OMR (Old Mahabalipuram Road) has gone through a major price correction, since it was first announced about a year back.

Rates were initially at Rs.30 Lakhs (Rs.3500/sqft), when first announced during August 2008, just before the recession symptoms were felt. Refer to the following news article on the project, mentioning those rates..
thehindubusinessline.com/2008/08/...

The same project was later available at a special offer price of Rs.3250/sqft, in mid-Feb 2009 at FAIRPRO.

And, as of Aug 2009 (one year after after that initial announcement), the rates seem to have corrected to Rs.19 lakhs, for the same 2BR homes starting at 784 sqft, as per the advertisement in The Hindu's Property Plus today (22nd Aug, 2009). The rate/sqft now works out to around Rs.2425/sqft.

That is around 36.6% price correction for the ETA Star Rosedale project (Rs.11 lakhs less, from Rs.30 Lakhs), which now brings it back into the realm of the newer project rates.

From the list of major projects in Padur and Padur/Kazhipattur locality, the odd-men-out seems to be Jain's Inseli Park which has a rate/sqft as 3745 to 3945 and Akshaya Adora at Rs.4000/sqft.

I assume that the rate correction should ideally have a retrospective effect on those who had booked earlier too.

It might be disheartening for those who have already invested at higher rates, to see the rates fall lower than what they had paid. The decision on whether to offer refunds and the actual quantum of the refund is fully under the purview of the builder.

Recently, Doshi offered price guarantee for the Doshi Nakshatra project to enthuse prospective buyers to let go the price drop concern. Probably more buyers will start asking for such guarantees - though, I believe that it won't be much useful. This is because we are already seeing some pretty good corrections in the rates.
at 8:15 PM No comments: 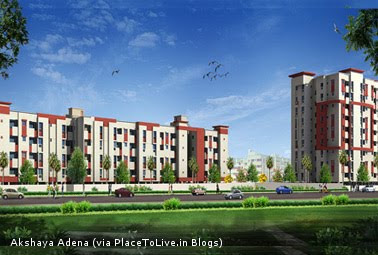 Booking has (at last) commenced for Akshaya's Adena project at Padur, OMR.

Akshaya has announced special rates for just 2 days, which is slightly lesser than what we reported had earlier (Rs.2770/sqft and 18 Lakhs). Now the rates start at Rs.17 Lakhs and works out to Rs.2700/sqft. The special rates are available for just 2 days - Aug 22nd and 23rd.

There will be a total of 199 apartments coming up in in the following sizes and rates..

* Anti-skid tiles
* Rails/grab-bars in bathrooms
* Seats in bathroom, for seated bathing.
* Trolleys for moving gas cylinders.
* Sharp edges, both inside and outside the building, would be chamfered
* Round the clock medical care - via a clinic to be set up within complex.

the following amenities are also available..

The booking announcement comes 4 months after giving a hint of Akshaya Adena, when Alliance Gardens was announced.

For more details on the project including location on Google Maps, see PlaceToLive.in listing of Akshaya Adena.
at 6:58 PM No comments:

Unitech Homes is launching an affordable homes project next at Nallambakkam on the Nellikuppam road, South from Kandigai on Vandalur-Kelambakkam road. 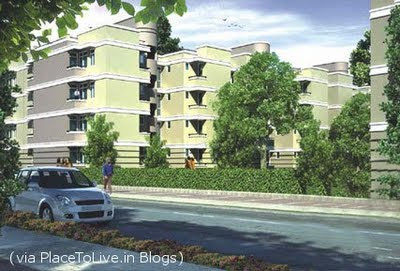 Unitech Unihomes at Chennai will consist of 2 bedroom apartments of sizes 700 and 715 sqft, coming up in 64 towers. Unitech Unihomes is to come up on 13 acres, adjacent to the integrated township of Uniworld City. The rates start at around Rs.13 Lakhs.

Amenities and Facilities include..

Kandigai junction is at around 7.7 km from GST and around 11.1 km from OMR

For more details on the project check out PlaceToLive.in : Details of Unitech Unihomes at Chennai

Seems the builders are going all out to attract the "Retired & Rich" category. The effect of recession has reduced the numbers from the salaried going for new home loans and hence the builders are targeting the cash-rich class, the retired class. 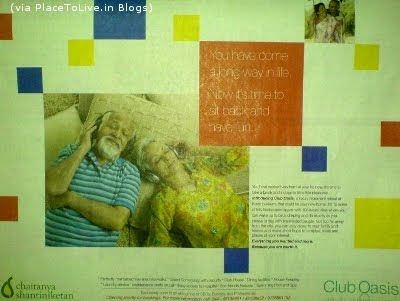 The latest builder to jump onto this bandwagon is Chaitanya Shantiniketan, which has put up an half page ad on the back-page of Hindu Property Plus to counter the half-page ad on the front-page by L&T Arun Excello's Estancia's offer for Senior Citizens, which was covered in our blogs - well before the Property Plus ad today.

The surprise today was of course Chaitanya Shantiniketan's ad, which offers Club Oasis at Kelambakkam. Their website does not yet have any details of this project and even their ad mentions that bookings are to be open "soon".

Seems to be a quick ad put out to counter L&T Arun Excello's ad, to senior citizens "Do not make a commitment, wait for us, we have something for you coming soon."

Reminds me of how Akshaya put out its PR on its Adena project (Padur / Kazhipattur), very soon after Alliance started marketing Gardens @ Orchid Springs (Padi/Annanagar Extn.), both targeting Senior Citizens. Read about it at : Alliance Gardens vs Akshaya Adena - Battle for the Senior Citizen market

Club Oasis is to come up on 12 acres of fully landscaped space and will contain 108 luxury villas.

Features in Club Oasis include..

More details on Club Oasis will be made available soon at http://www.PlaceToLive.in

Eyeball Media's Budget Homes 2009 is on at Valluvar Kottam, Chennai

Eyeball Media's expo of Budget Homes is now on at Valluvar Kottam. The expo is to be on for 3 days - 7th, 8th and 9th August 2009 and is supposed to showcase budget homes (defined to be Rs.35 lakhs or less, as per their ads).

Had expected big builders, like those who showcase at CREDAI/FAIRPRO, offering apartments/homes in that price range to be present at the Expo. But, was surprised to find none of them. To get an idea of those I had expected, see this list of big players offering residential projects in Chennai (sorted based on Rate/SQFT).

While there were other players offering affordable apartments and independent-villas, I did not expect a huge chunk of the stalls trying to market plots (land). Abi Estates and Jain Estates (part of Jain Housing group) were the only brand names I could recognize. May be the focus was more on plots. Or may be Eyeball was not able to rope in the CREDAI players for this expo for some reason - possibly the CREDAI players did not want to dilute the FAIRPRO brand value.

Eyeball did a good job on outdoor media advertising for its expo, but failed to set the expectations right - at least for me. Forget a dedicated website for the expo, Eyeball did not even update its existing website with any details. Nor did it have ads in today's Hindu. Let me see if they are going to have one on Property Plus tomorrow.

(Update : They have put an ad on the 7th page of Property Plus, as shown below) 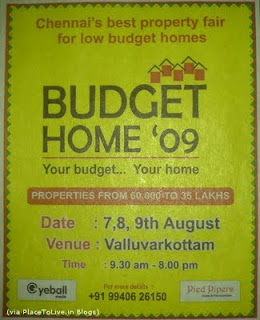 Well, you would say FAIRPRO spoiled me into having these expectations. They had put up a dedicated website with builder details and had ads coming out weeks before the expo. They even gave out a good quality book listing all the builders and their projects showcased at the expo.

Anyway, more details on the projects showcased at the stalls in the Budget Homes expo at Valluvar Kottam will be made available at www.PlaceToLive.in very soon.